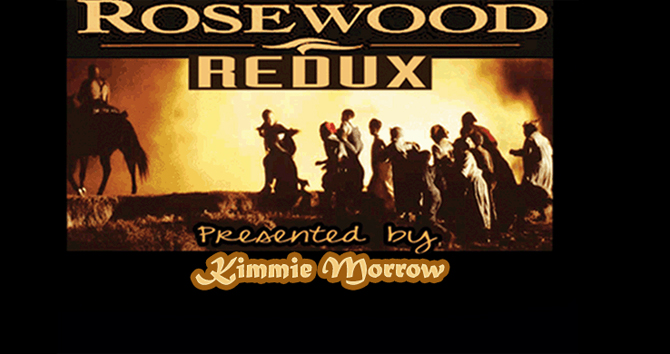 The movie ”Rosewood” was released February, 21, 1997, directed by John Singleton.

An alleged sexual attack by a black man on a white woman, it was all a LIE. It shows Fanny Taylor being beaten by a white lover, and then claiming a black man had done it.

Rosewood is shown as a somewhat richer, than there nearby milltowns surrounding Sumner. The town’s county sheriff leads the massacre mob to Rosewood. The real leader was a self appointed vigilante named Poly Wilkerson.

The movie evokes the time and place powerfully decrypted in the town of Sumner Florida. It’s accurate in portraying Rosewood as an independent, self reliant community with some comforts. Black men in Rosewood Florida were doing economically better than a lot of backwoods whites.

The massacre started by the rumor of a white woman Fanny Taylor who said she was beaten and raped by a black man, when it was known this women was not only promiscuous but was really beaten by her white lover. This stirred what was already silent racial tension in the air. The attention from this rumor would spread like wild fire to whites near and far.

These white men who attacked Rosewood apparently considered themselves as righteous. Feeling legally constituted for the brutal violence, rapes, lynching, and killing of black men women and children. Lynchings were symbolic in these times; it killed not only the person but also the soul of those that would survive.

THE NAMES OF THE SURVIVORS